We started this past week by exploring La Paz, the highest capital city in the world at 3,650m. It is a cool (literally!) city in a valley with its buildings expanding all the way up the sides of the surrounding mountains. We walked all over looking at the sights as well as for replacement items that were stolen back in Peru. We went to the Witches Market (Mercado de las Brujas) which was interesting if not a bit creepy with the baby and even fetus llamas, dried frogs and little soapstone carvings claiming all kinds of things. There are lots of different markets on the streets with most areas specializing in different things, like potato street, citrus avenue and electronic alley. 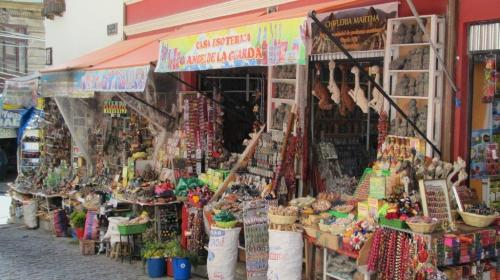 The witches market (check out the things hanging in the doorway…) 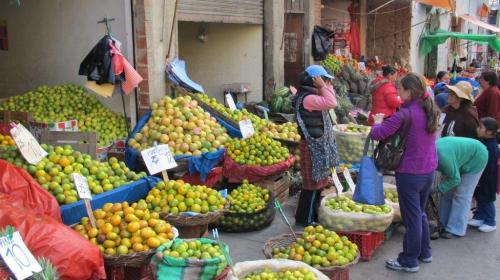 We left La Paz and headed south east towards the famous Salar de Uyuni (salt flats). We drove all day and made it after dark to Ojo del Inca (eye of the Inca), a natural hot spring. It’s round and about 100m in diameter and close to 30°C.

Driving out of La Paz – where any lane will do apparently! 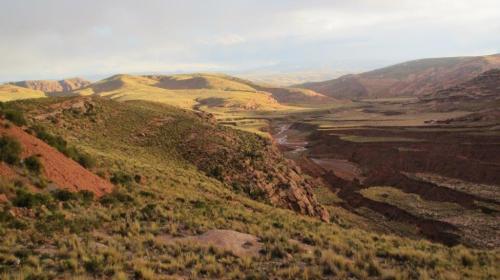 It’s not quite all deserts in Bolivia

Our camp next to the natural hot pool

We were the only people camping there and went for an early morning dip in the 7°C morning air temperature. Easy getting in but difficult getting the nerve to get out! 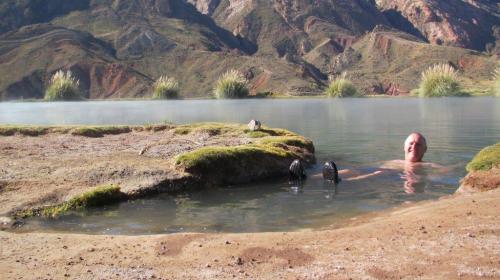 Christine not wanting to get out

Next we made it to the jumping off point for the worlds largest salt flats, the dusty town of Uyuni.

The remains of an old church by the road 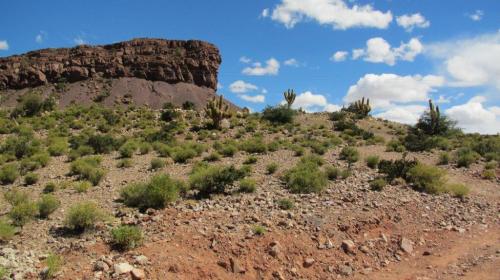 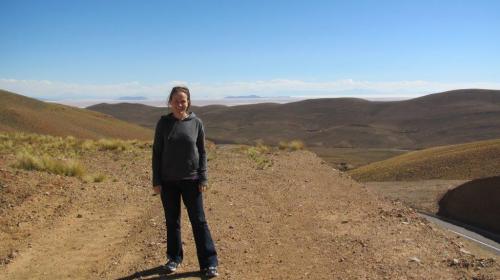 Our first glimpse of the salt flats in the distance 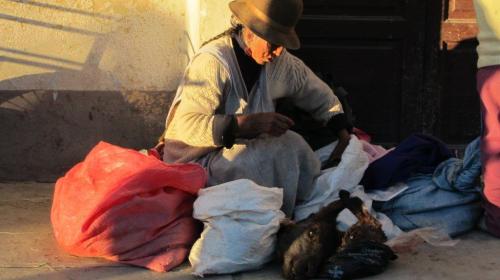 The ‘on-footpath’ butcher in Uyuni

The salt flats cover an area of 10,582 square kilometers and are the result of prehistoric salt lakes that used to exist here. We prepared for our excursion on the salt flats and took off the next morning, a little bit nervous about what we would find. We were pleasantly surprised with the condition of the salt and how easy it was to drive on it with Ginger. It’s the start of the dry season so there was minimal water and the tracks where the gazillion daily 4WD tours go were fairly clear, abeit a lot of them.

Ginger & Dave near the edge of the salt flats 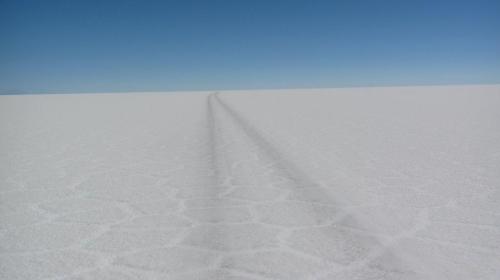 Ginger pretending to be a 4WD

We tried to take the cool perspective photos that you see everyone taking (with some success) but were just excited to be on the flats and in awe of the endless vastness and brightness. Super cool place! 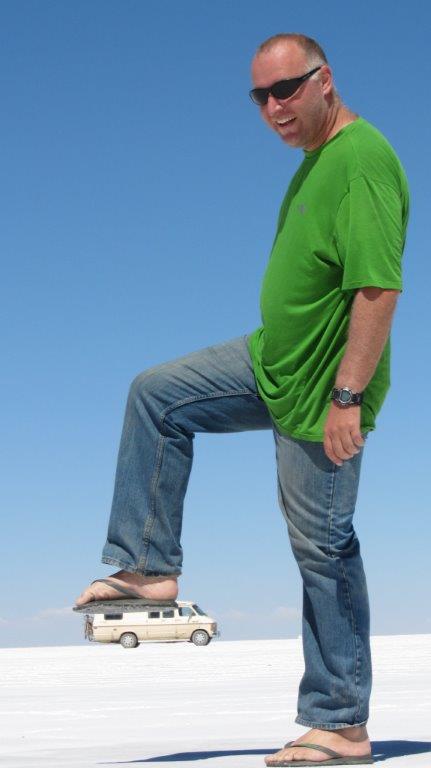 Of course we wanted to camp the night on them to see the sunset so pulled off the ‘road’ and waited for all the 4WD’s to leave so we could enjoy by ourselves. It was a quiet but cold night! 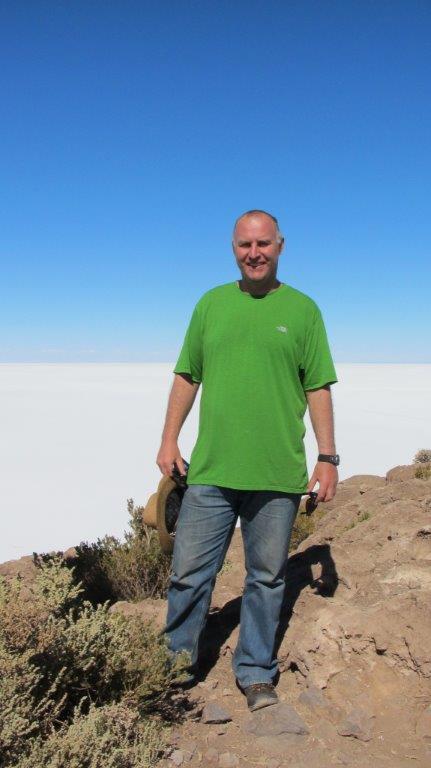 Exploring one of islands in the salt flats

Watching the sun set from our camp 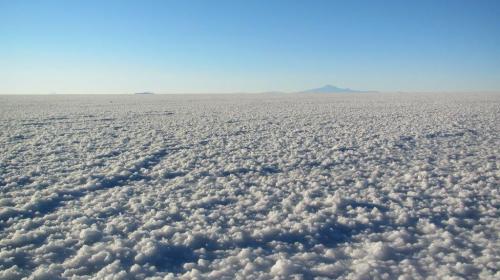 We had planned to return to Uyuni to re-fuel and resupply before heading to the border, so had left town with only half a tank of gas, but the next day we had a chat with some tour guides who confirmed that we could get off the salt to the South, and would be able to buy fuel in one of the small towns or at the border. So we made our way across and off the salt flats in the direction of Chile. Our GPS was pretty useless except for telling us the general direction we were going and the place we wanted to get to. We followed tire tracks across the salt and desert on some horrible ‘roads’ but eventually made it to the very small and quiet border crossing from Bolivia to Ollagüe, Chile. We were so happy to be there!

Rough roads on the way to the border

It was an easy crossing that we had prepared for, having boiled our eggs and eaten all our fresh fruits and vegetables. Finally, Chile!

Of course there was nowhere to buy any fuel here – and the one lady at the border who had some fuel to sell wanted US$5 a litre for it!! Nothing to do but keep going… Dave’s stress level was pretty high as he watched the fuel gauge keep getting lower and lower.

We had some more dirt roads to get through and had to sleep on the side of the road enroute to the main highway. But it wasn’t too bad with the surrounding volcanos and scenery that would impress anyone. The next morning we even managed to hike up the cindercone we had just slept next to. Great views from the top. 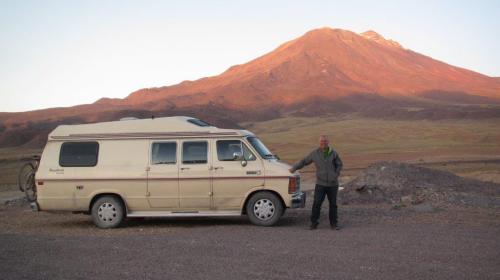 Christine on the edge of the volcano’s crater 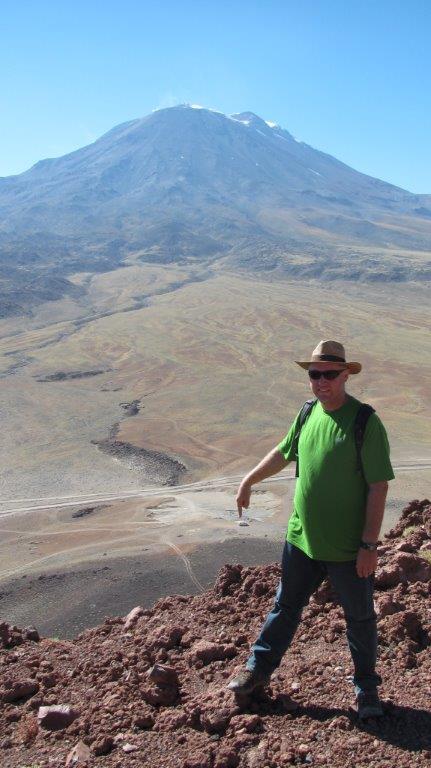 Dave pointing out Ginger far below

We eventually made it to the mining town of Calama where we could get some petrol. We had managed to stretch out one tank of petrol to over 850km! And there was still nearly 20 litres in the tank – pretty good going considering the elevation and terrible roads we had been on. 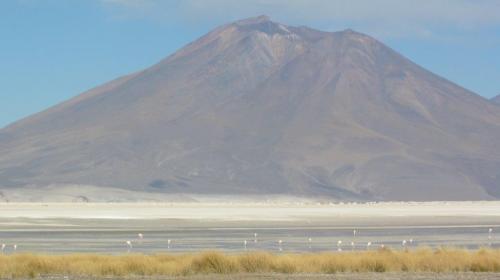 We were rewarded greatly for all our efforts by arriving in Antofagasta and staying with our friends Shauna and Julian. We were so happy to see them for the 3rd time and on a 3rd continent this year. First in Nepal last March at the start of our travels, then when crossing Canada in Lake Louise and now here in Chile! They have a super apartment here right across from the beach and have given us food, lodging, parking and lots of information on Chile and Argentina. We are going on our third night now, but will try to pry ourselves out of their place tomorrow to get back on the road. Thank you guys so much for a much needed break from our travels!