Into the coffee regions

This week has been a pretty laid back one. We vegged out in Villa de Leyva for 4 nights recovering from our big hike in El Cocuy. Not exactly sure what we did there during that time but get caught up with our families and email, oh yes and eat a lot of pizza. We eventually headed toward Bogota and made it pretty close before it started to get dark. We went looking for a place that some previous overlanders had given GPS coordinates for on their blog – but we just couldn’t find it. However, in the dark we managed to stumble upon a pretty nice camping area with hot showers and owners that gave us copious amounts of ‘aromatica’ which is a hot drink of infused fruits.

Our nice camping area in Guatavita

The next morning we saw what a nice place it actually was and the owners were super friendly and again gave us some more free cups of the fruity tea like drink. They were also very interested in the van and the younger son said it was his ‘sueno’ or dream to have a vehicle like ours and travel like us. We gave them a little tour of Ginger, got some pictures and then headed toward the big city.

Our mission for Bogota was to find a wedding dress shop! Christine could not find that many online here in South America, but there was one that sold nice dresses and looked good. The map from the website was incorrect but thankfully our GPS eventually got us there. Of course Dave was required to stay outside and ended up being harassed by the parking attendant for the entire time he was waiting there. The dress mission was not successful but was very informative and gave Christine a few things to think about. Like how difficult it is going to be to try and find a dress on the road! That will be an ongoing mission we think.

After fighting our way out of Bogota traffic we headed north east towards the coffee district. We were a bit nervous about road blocks as everyone and their dog are on strike down here – coffee growers, truck drivers, miners, teachers, etc… We had no problems with strikers, however the road was long with a huge mountain we had to go up and over with tons of slow moving vehicles. On our descent we literally drove between 15-28km/hr behind molasses like trucks. Needless to say at the bottom of the mountain our brakes overheated and gave way. Pressing the brake pedal to the floor with no effect is never fun! By this time it was late at night (8pm) and we don’t really like to drive in the dark. However what can you do! We continued on to Salento, a cool small artesan town, and found our recommended hostal/camping site at La Serrana EcoFarm and Hostel. We found a spot alongside another overlander from British Columbia and got some dinner before falling into bed. We had started the day at 2,900m elevation, dropped down to 300m, climbed back up to 3,300m and then dropped again to 1,500m – no wonder the brakes were overheating!

Salento is a cool little town with lots of “arts and crafts” shops as Dave would say.

The central plaza in Salento with wax palms 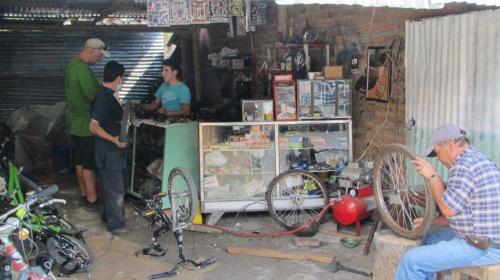 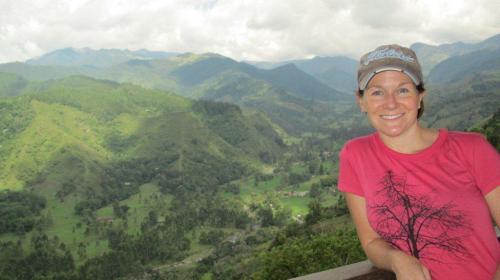 The view from the towns mirador (lookout)

Salento is also really close to Valle de Cocora which is the principal location of the Wax Palms. It is the national tree and symbol of Colombia and a protected species, especially from all those folks that used to use it for celebrations of Palm Sunday (no joke!). We took a jeep taxi to the start of a day hike and climbed the mountain for the great views. Of course we had cloud coverage and couldn’t see a darn thing!

Heading up the mountain 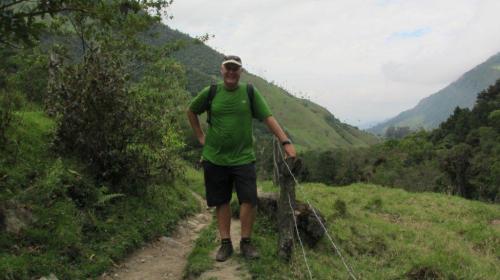 Wax palms disappearing in the clouds

A great view from the top

But on the way down we did get some wonderful views and I think pictures! 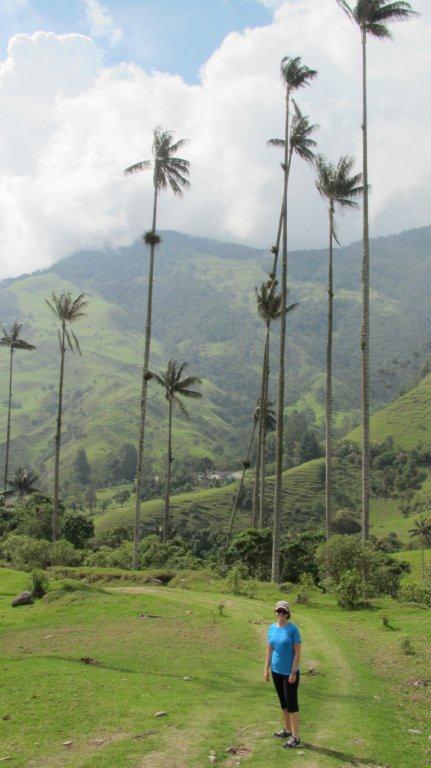 One not so good thing is the dogs around here! As we wrote back in Mexico, Christine’s mom got bit by a dog and since then Christine’s been a bit skiddish about them. Dogs down here are a whole different breed and are not like the nice friendly pets at home. Christine went to check out the view of the valley from the other side of our Hostal and was charged by 2 vicious dogs. There were lots of bared teeth and saliva but thankfully they didn’t bite. It was a close call though!

Tomorrow we head south and hope that we don’t come up against any roadblocks!

2 responses to “Into the coffee regions”