On the road again!

This week sucked! We had a couple of crappy days just waiting for Ginger to be fixed at the service station. We stayed at Circus Circus Resort which was pretty below average and is really showing its age. However this did give us the opportunity to see Kã. It was a great Cirque de Soleil show however we both really thought Le Reve had more ‘wow’ moments.

Can you spot the odd one out?

Regarding Ginger, it turns out there was no ECU part around town so we had to order it from Pittsburg. We picked her up Wednesday with much excitement and a happy reunion. This was short lived however, as we only made it approximately 20 km before another catastrophic breakdown on yet another freeway. The service station arranged a tow and we were back in the garage. A new alternator and regulator this time! Yet another Vegas hotel (and more freakin’ buffets!).

Finally on Thursday we got Ginger back and were on our way to the Grand Canyon. She’s running way better and climbing hills like a champ! The service was successful, despite the many breakdowns, and will hopefully mean less issues later on.

We saw the Grand Canyon on Friday!

It was pretty cool although Dave was a bit under-enthusiastic about it all. This may have been due to our dashed dreams of doing the two night Rim to Rim hike we had planned. We had planned to do this early in the week, but all the extra repairs meant we arrived right at the start of a long weekend. We tried for a last minute backcountry permit two early mornings in a row but it was no use and all full. They usually book up 4 months in advance and it’s currently their high season. Maybe next time! 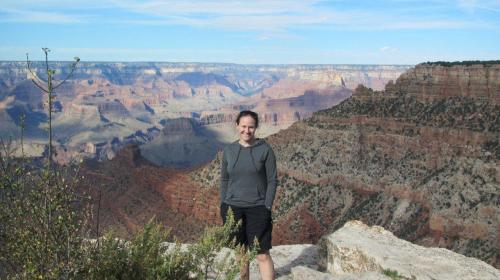 Colours of the Grand Canyon

We did a little more exploring of the park by car and then headed South West back towards California and our next destination: Joshua Tree!

One response to “On the road again!”

Leave a Reply to Peter And Ange Cancel reply