After visiting Mt St Helen’s we headed South into Oregon.  Dropped into the city of Portland for some great pizza for dinner and a nice walk around the city centre.  As it was still Labor Day weekend we opted to spend another night in a Walmart to avoid the crowds.  We chose one right near the big factory outlet stores as this was the plan for the next morning.  As far as the Walmart camping, it has definitely improved since our Abbotsford experience.  Our two most recent nights in a Walmart have been quiet and we both slept well.

The outlet stores turned into a big day of shopping, where we both bought enough t-shirts (much needed) to last us until 2022.  We also visited an REI outdoor store and kitted ourselves out with a tent, sleeping bags, sleeping mats, and a cooker.  Now we are all prepared for some backcountry exploring in the California National Parks.  California here we come!!!
After the hassles of city life we decided to head for the coast again.  We easily got a nice campsite since all the weekenders were gone home and the school year has started.  Now it’s just us and all the gray nomads!  We’ve spent most of the week slowly working our way down the Oregon Coast which has been stunningly beautiful.   ‘A real treat’ said a park ranger and we must agree.

On Cannon beach – ‘The Haystack’ in the background

The bummer was that it was mostly enveloped in a thick cold fog which limited the, what must have been, spectacular views. 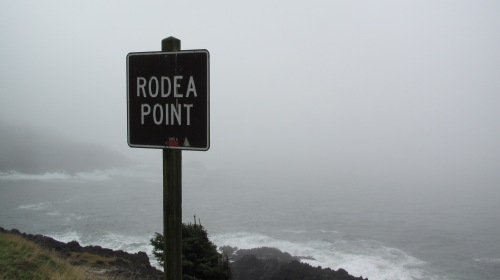 Heavy fog along sections of the coast 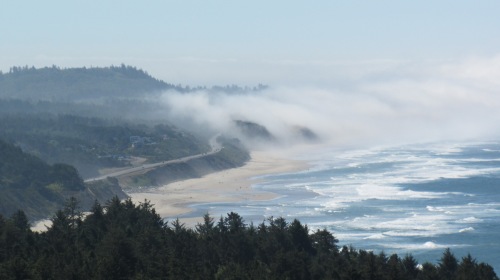 Fog rolling onto the beach

We had a lot of fun playing on the sand dunes which can be up to 150m tall and extend for kilometres from the beach.  Well, except for the nosedive that Dave took but sadly due to a camerawoman malfunction there is no photographic evidence – darn.  It was pretty funny and no one was hurt in the process, besides Dave’s pride. There are huge dune areas where you can go crazy on dune buggies, though we decided rolling down the dunes was more fun, and cheaper.

Christine having some fun 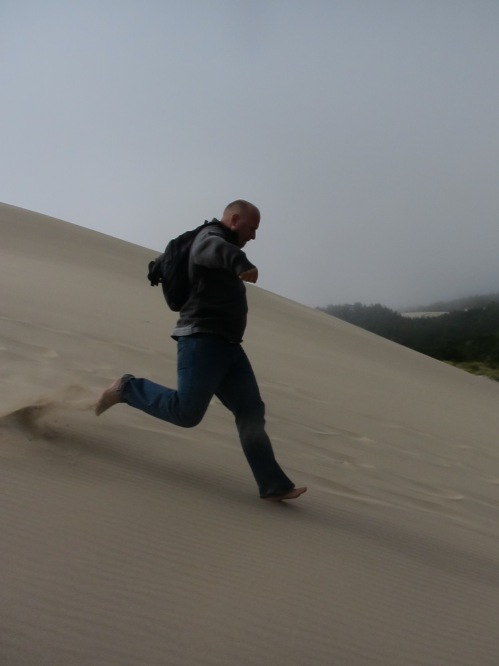 One of the big concerns we had on the way across Canada was getting Ginger up and over the Rocky Mountains, and especially Rogers Pass which was a climb to 1300m.  We thought that once she was over that it would be an easy run all the way South.  So it came as a bit of a surprise when we had to pull Ginger over for a cool down after she had climbed 700m without a break.  A quick check of the map gave us an even greater suprise when we saw two more passes we had to go over, both over 1500m high.  Oh well, nothing for it but to give it a try.  This was all because we decided to head inland to check out Crater Lake National Park, which as the name suggest is a lake inside a volcano crater.  By the end of the day Ginger had climbed from sea level to over 2300m, a great achievement for the ol’ girl, and a good confidence booster for us. 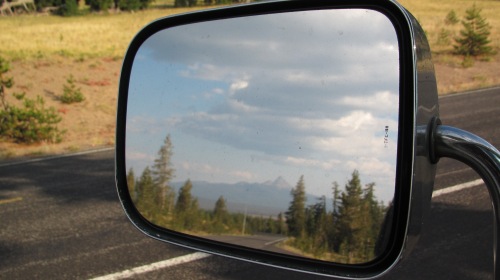 Not a bad view while letting Ginger have a breather

We had a quick view of the lake as the sun was going down, and decided to head back in the morning for another look and a hike along the calderas edge.

The sun setting over Crater Lake 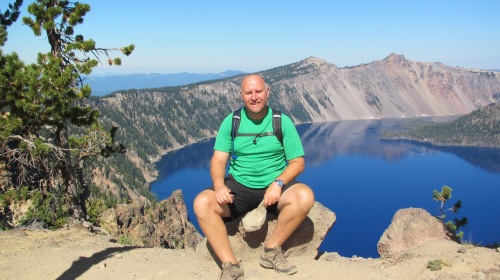 On our morning hike

Great views during the climb

We are now stopped for quick re-supply, and hope to be in California this afternoon!